You can choose to have episodes be Full, Trailer, or Bonus. Inside each episode is a selector to switch between the three options. This affects how the episode appears in some podcast apps.

The Full episode type is the standard, default episode type. It is not treated specially in the apps. You'll want to use Full for almost all your episodes. 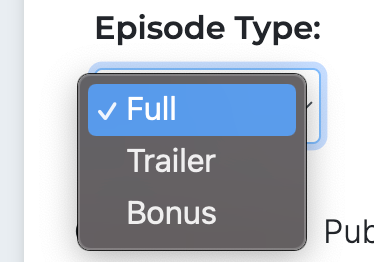 Important: Apps vary wildly in how they treat these episode types if at all. See here for a table of apps and how episode types are represented.

If your feed is using seasons with episode numbering, trailer episodes will not be numbered. This means the Season 3 Trailer is followed by S3E1 as expected.